This A/B test changed how we write our fundraising emails

For years, every Heritage Foundation fundraising email was sent from our president. The appeals were sent on templates that resembled direct mail stationery, with the logo at the top. They even included a faux signature at the bottom.

They were written in formal, authoritative language that we affectionately called “God voice.” “You are not one to be swayed from your convictions,” said one appeal, which called on donors to “make a bold statement” by making a gift.

We sent emails that way because, we told ourselves, that’s what our donors expected. It’s what we had always done. But might it work better if the emails sounded like they were written by an actual person, not Fundraising God? This was a lesson the Obama campaign learned from some of their testing.

So we set about testing it ourselves. Our hypothesis was simple: people give to people. No actual person writes like we were writing our fundraising emails.

We created another email to test against our typical message. It came from our membership director and adopted a far more casual tone. And we stripped the fake stationery so it looked like a real person wrote it. 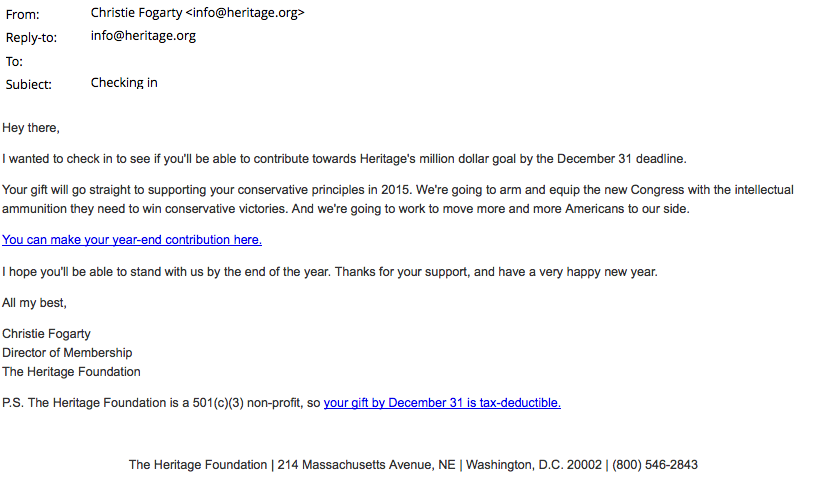 We tested this head to head against the God-voice email above. The more informal language won. It wasn’t even close.

Better yet, because we tested a theory of the donor - that people are more likely give to people - we could extrapolate this approach to future appeals. This wasn’t a one-time win but a lesson we could apply going forward.

Why test in fundraising? Because your gut instincts are probably wrong

Testing is fundamentally about learning and making decisions based on data. It’s about understanding who your donors are and what inspires them. Moreover, it reflects a humility — a recognition that we fundraisers don’t necessarily have the answers.

There’s a great quote from a senior member of Barack Obama’s 2012 email team: “We basically found our guts were worthless.”

Here was a team that ran circles around Mitt Romney when it came to fundraising. It turns out the campaign wasn’t run by a bunch of fundraising naturals who knew just what to send their donors.

Instead, this effective fundraising team was great at learning what works and what doesn’t through testing. They made decisions based on data, not gut instinct or some fundraising “best practice.”

Testing is not a check-the-box exercise

It’s not something you do at the last minute. It needs to be fundamental to your process.

They famously tested their way into an email with the subject line of “Hey.” That email made huge sums of money.

The Obama campaign learned a different lesson, the right lesson. “The subject lines that worked best were things you might see in your in-box from other people.” That’s according to Toby Fallsgraff, the campaign’s email director.

That’s a useful insight, because it’s about what their donors think and believe. It can inform future fundraising campaigns.

When testing, you don’t want to test this word against that word. You want to test different theories of the donor against one another - theories about how your donors think and act.

Several years back, The Heritage Foundation conducted a substantial test to determine the effect of a multi-channel approach to fundraising.

We sought to definitively answer the question: are we better off sending just a direct mail letter, sending only emails, or sending both?

The real worry - one I’ve heard from other nonprofit fundraisers - was that sending emails alongside a letter would cannibalize the letter and reduce mail response. In other words, people would simply give online instead of through the mail.

So we took one of our best mailings and split it three ways: one segment got just a letter; one got a letter with no ask and an email; and one got both a letter and an email. The emails, which made an ask mirroring the mail piece, were timed to arrive shortly after the letters hit mailboxes.

Unfortunately, this test was never properly documented, and the results became the stuff of Heritage lore. Until now.

I dug up the data, and the results are astounding:

Not only that, people who got the multichannel treatment were also more likely to give online too. That means the worst option is to send people only email! More on that in another article.

This boost from multi-channel fundraising can be seen across the entire direct mail program. According to another study we ran, donors who receive emails give roughly 25 percent more annually than those who get only direct mail.

While we don’t necessarily expect these exact results in every campaign or for every organization, we can conclude that sending followup emails strengthens rather than cannibalizes direct mail.

Why do you still ‘blast’ your donors?

Each of your donors is probably open to receiving a personal email from you making the case for a gift.

None of them wants to get an impersonal “e-blast.”

Even if you’re sending a single message to everyone on your email list at once, always remember there are unique people at the other end. You’re sending a message to each individual person, and your terminology should reflect that.

Over a dozen operatives interviewed for this story say [Campaign] has been quietly building a digital and data operation which may rival Obama’s vaunted machine. “This is the best digital operation in history.” Said one operative familiar with [Candidate]’s digital operation.

The closing paragraph nails it.

Nathaniel Ward is an online marketer and fundraiser in Washington, D.C. Read more about me.